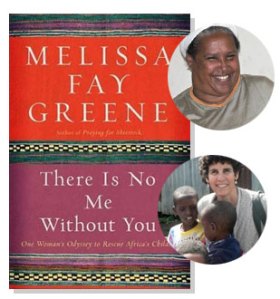 This week a true hero to the orphans of Africa passed away.

After the loss of her husband and daughter, Haregewoin Teferra, turned her home in Ethiopia into an orphanage for AIDS orphans and began facilitating adoptions to homes all over the world. She passed away of natural causes in her home on Tuesday. Her story is told by author Melissa Fay Green in the book There Is No Me Without You.

In honor of her life and the continuing need for the care of millions of orphans I want to share some quotes from the book over the next week.

Here is the first highlighting the sheer magnitude of the orphan crisis in Africa where close to 12 million children are orphaned as a result of HIV/AIDS (that’s just Africa!). Melissa Fay Green writes:

“Who was going to raise twelve million children?

That’s what I suddenly wanted to know.

“Who was teaching twelve million children how to swim?

Who cheered at twelve million soccer games? (That sounded like our weekends.)

Who will quiz twelve million children on Thursday nights for their Friday morning spelling tests?

Twelve million trips to the dentist?

Who will wake in the night in response to eighteen million nightmares?

Who will help them avoid lives of servitude or prostitution?

Who will pass on to them the traditions of culture and religion, of history and government, of craft and profession?

Who will help them grow up, choose the right person to marry, find work, and learn to parent their own children?

Well, as it turns out, no one. Or very few. There aren’t enough adults to go around. Athough in the Western industrialized states HIV/AIDS has become a chronic condition rather than a death sentance, in Africa a generation of parents, teachers, principals, physicians, nurses, professors, spiritual leaders, musicians, poets, bureaucrats, coaches, farmers, bankers, and business owners are being erased.” pp. 22-23